These are the Dutler's. We met them in the tiny mountain town of Maienfeld, Switzerland where Frau Dutler proudly regaled us with the tale of her husband's steinbock (better known throughout North America as an Alpine Ibex). A species that was once in danger of extinction but has rebounded thanks to successful conservation efforts that largely parallel that of North America's wild sheep. More than a native species, the Steinbock is a symbol of the Canton (Swiss version of a state or territory) of Graubünden. Images of these mountain goats are used throughout the region and can be found on everything from the Canton Flag, to T-shirts and company logos. Hunters proudly display their skulls above the doors of their cabins and apartments even in larger metropolitan city centers. 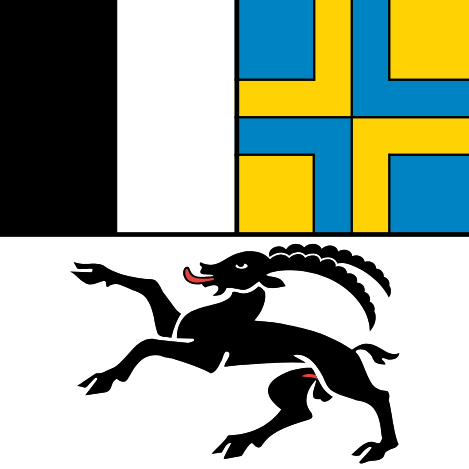 (The Canton of Graubünden Flag)

In front of a wall covered in family photos and horns, Frau Dutler told us how her husband spent days on the top of the tallest mountain which sat behind their tiny town where he searched for these elusive creatures. She comically exclaimed that even his friend/photographer had left him on the second day of grueling hiking only to return at 4 AM the next morning, pounding on the door of the hunting cabin after he found himself unable to sleep, thinking only of his friend alone on this epic pursuit.

We heard of the emotional high Herr Dutler felt after successfully killing a female Steinbock. Which in Switzerland is a pre-requisite for taking a male and has been a big part of the successful conservation campaign the country has promoted in recent decades. This success was then followed by near failure when Herr Dutler's rifle suffered a weak primer strike while executing a shot on a male steinbock. After hearing the heart stopping "click" of the firing pin striking the round without detonation, his target was on the move but Herr Dutler was able to quickly work the bolt, feeding a new round into the chamber, reacquire his target, and execute a successful shot that took down the animal he had dreamed of pursuing his entire life.

Frau Dutler then told how she drove to meat her husband and how the pair returned with the meat and horns of the steinbock on the top of their car like an army coming home for a triumphant campaign. She expressed how everyone celebrated the accomplishment and fed on the meat of the revered beast. It is a story you could tell she had told countless times but still professed every detail with the utmost enthusiasm and pride.

A few years after Herr Dutler killed this Ibex he took a serious fall on the very same mountain. The damage he sustained to his hip left him with a severe limp that he still carries to this day. His injuries have kept him away from the harsh and unforgiving hunting of the Swiss mountains. As Frau Dutler continued to share stories of her husband's conquests we noticed that on the wall next to Mr. Dutler were two empty hanging pegs. We came to learn that this was once the place of his cherished hunting rifle that was now gifted to his grandson so that he may continue this tradition. With his grandfather's rifle his grandson has created new stories and adventures to pass on and captivate the imaginations of future generations just as his grandfather's have ours.

We expressed our gratitude to the Dutler's for sharing their time and home with us and relayed to them that where we come from in North America, anyone who is able to kill a Ibex, Sheep, Ram, or other mountain goat is regarded as an elite hunter. Frau Dutler translated this for her husband with a tremendous smile while smacking his arm and embracing him in the tightest of hugs. It was clear that her pride in her husband wasn't just built watching his accomplishments from a distance, but that she was very much actively invested in his success. It was Frau Dutler who drove her husband to their mountain hunting cabin for each of his hunts. It was she who helped him recover many of his kills and carry them off the perilous rock faces of the Swiss alps. And it is she who today helps the injured old hunter around the house and to his favorite chair on the balcony of their apartment each morning where he sits and stares at the mountains that provided them so many memories of.

I have had the pleasure of meeting hunters from nearly every continent and several things remain true including their dedication to conservation, harvesting of the meat from the animals they kill, and passion for passing along the tradition of hunting to the next generation. Beyond these the way in which they collect and display skulls, horns, and pelts varies but in every instance they almost never appear as objects of hubris or boast. On the contrary they are almost always objects of reverence, reflection, and respect. They are symbols of the hard lives of animals who provided sustenance and cherished memories. But they are never trophies for our stories are our trophies.